047. A CHURCH BUILT ON THE ROCK HAS A FOUNDATION OF A CULTURE OF PEACE

There are few ways that a church can better develop the attributes of Jesus Christ than by forming and maintaining a culture of peace.  A culture of peace is when forgiveness and reconciliation become so much of the fabric of a church that conflicts are resolved before they spread into chaos, disorder, and division.  The “reinforced behavior” of the church is peacemaking, the harvest of which is righteousness, rather than unforgiveness, indignation, and anger, the product of which is sin and destruction. 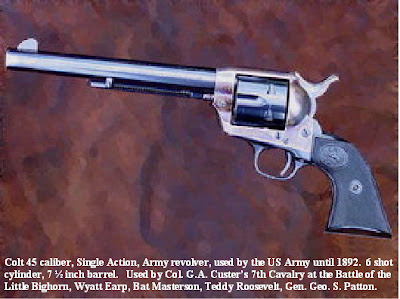 Pictured against the black background is a Colt Percussion Revolver 45 caliber, 6 cylinder civilian model pistol dated around the time of the civil war.  It is a predecessor to the newer Colt pistol pictured against the brown background (from Wikipedia), manufactured for the US Army until about 1892.  By the end of its manufacture, this gun had earned for itself a nickname, “The Peacemaker.”

With such a tool of enforcement, Clint Eastwood might have said, “Just back off and shut up, or else I’ll give you a new understanding of ‘peace.’”  (In this instance, it might have been called the “piecemaker?”)

However, using the scriptural definitions discussed in previous posts, this pistol would have been called, “The Peacekeeper,” not “The Peacemaker.”  Making the peace of Christ, it did not. 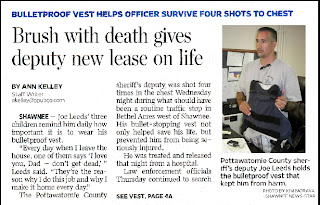 Moving now from guns to bulletproof vests.  A little over a year ago (~2010), a story was published in the Daily Oklahoman about a Pottawatomie County sheriff's deputy who was shot four times in the chest at point blank range during a routine traffic stop and who was saved from serious injury by wearing a bulletproof vest.

Wearing a bulletproof vest is a preventative measure that must be taken ahead of time.  Putting on a bulletproof vest after one has been shot doesn’t help much.   The year before, two of the deputy’s partners, who had been shot and killed, were not wearing protective vests.

So it is with the protection of the culture of peace.  With this culture in place, peace, a fruit of the Spirit, has been developed before an assault takes place.  Peacemaking is often used for damage control, and it is certainly of value anytime it is used.  But if damage can be prevented or minimized from the start, then the enemy will not be able to use his tools of disruption, chaos, division, and hate as effectively.   In this way peace is the bond for unity (Eph. 4:3).  Peacemaking keeps unity intact when enemy assaults attempt to generate division. 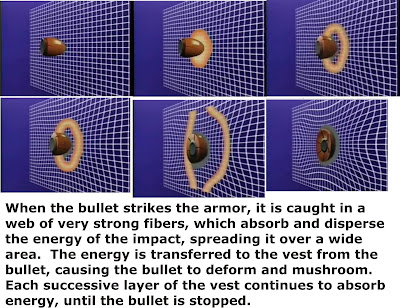 The diagram depicts how a bulletproof vest, such as the one worn by the deputy, works to protect the body from a projectile attack.  The energy from the bullet is projected laterally by the composition of fibers within the vest so that the force is absorbed by the material instead of penetrating through it. 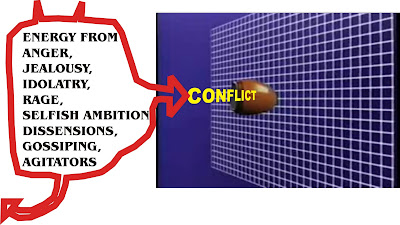 Satan, the adversary of the church and the accuser of the brethren, issues a projectile fueled by works of the flesh toward the body.  If the projectile penetrates the armor of the body, it will produce damage to the body and, perhaps, even be fatal.  The projectile is conflict and its damage will be chaos and division. 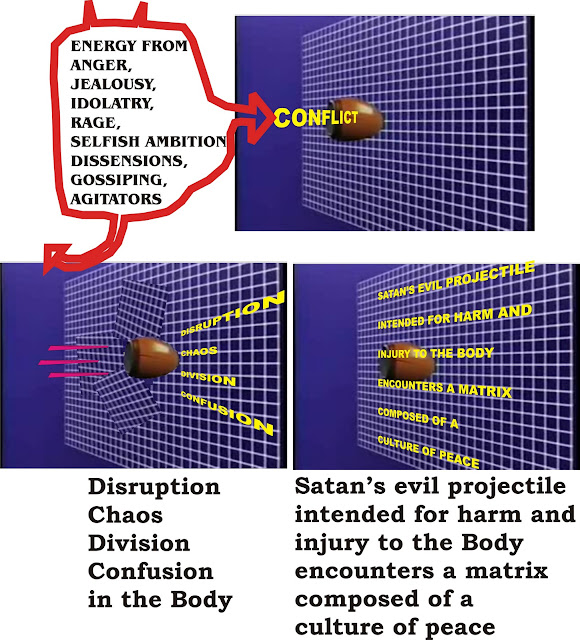 But the projectile of Satan hits a culture of peace that blocks penetration into the body.  The culture of peace is an established way of thinking in which people, when offended or hurt by something or someone else, first think of the love of God for them and for the other members of the body before thinking of a damaging reaction out of the flesh.  Peace and unity in the church are too important to be sacrificed on the altar of idolatrous selfishness, pride, and greed.  These peace generating channels are already in place.  Rather than defaulting to the behavior of the nature of Adam, people default to the behavior of the nature of Christ. 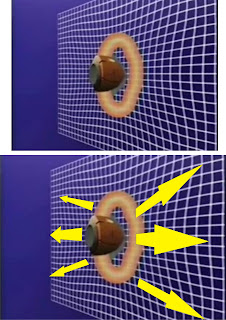 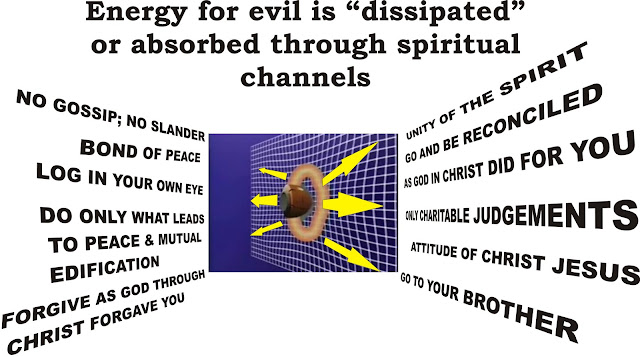 Love, peace, and unity have to be continually practiced and taught and reminded, else these processes will “run down” if left alone.  Peace leaks.  (This will be discussed further in future posts on the church and the 2nd Law of Thermodynamics.) 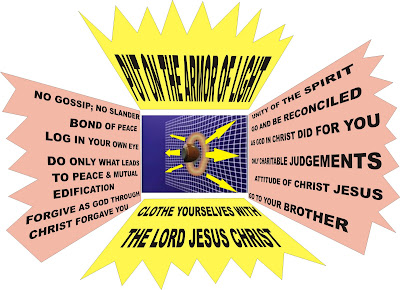 The role of peacemaking and maintaining a culture of peace is consistent with many other passages that deal with Christian behavior.

In a spiritual analogy to the bulletproof vest story, a “headline” was created to describe an opportunity during the last several years the Quail church has had to learn a lot more about the importance of peacemaking.  The actual “headline” is only representative, but the lessons are very real.

Peacemaking can be very helpful in resolving conflicts even when used like calling the fire department to put out a big fire.  But a culture of peace is more like having fire retardant in place so that the fire doesn’t spread in the first place and can be easily extinguished.

Where’s Smokey the Bear when you need him?

Oftentimes, there will be roots of bitterness from previous conflicts (products of peacekeeping?) buried just beneath the surface, waiting to be inflamed again.  Then, combustible materials are spread around over the surface, just daring a spark of conflict to occur.

Teaching about love, peace, and unity is preventive action.  Practicing these is growing to be like God.
Posted by drtheophilus at 6:17 PM